Note: Bathroom humor is part of a travel blog that I wrote during an extended business trip to India. I spent two months in New Delhi as my employer implemented a new business unit in two of its call centers. In addition to my professional work, I took time to study Hindi, an effort that fostered greater co-operation and trust among my Indian business associates. It also helped me better understand the culture. We believe that language opens a gateway to understanding culture. These pages focus on my observations and experiences in India. While I was there, I practiced Walkabout Language Learning. See the list of "More India Stories" on this page to explore how culture and language intertwine. 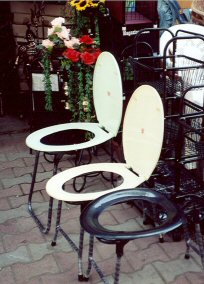 Personal hygiene customs vary from country to country, which can create fun bathroom humor stories. Although I wasn't terribly excited the first day when I discovered that only ice cold water came out of the shower spout, I wasn't surprised either. I inquired of the proprietress how to get a warm shower and was told that I have to switch on one of the light switches on the wall (there are seven in my bathroom, if you can imagine). The correct switch turns on the hot water tank that is mounted on the wall in my bathroom. It is about a 15 gallon tank, I'd guess. I suppose that I need to be quick while showering. Good thing it is summer in India. Daily temperatures have been reaching 40℃ (104℉). A cold shower isn't too terrible on a hot day.

As a child my mother taught me that something as mundane as shower water temperature could convey cultural information and teach about values of one's hosts in other countries. When we lived in the Solomon Islands, the natives -- the ones who actually had a shower instead of bathing in the river -- bathed in cold water. Mom said that she figured that Solomon Islanders felt like a cold shower was refreshing in the same way we viewed a cold glass of ice water on a hot summer day.

On day two, I switched on the light switch--a red light on the hot water tank came on--and hoped in. The result was that the shower was lukewarm because the water didn't have time to warm up.

I decided that perhaps I need to allow the hot water to warm up before hand, so on day 3, I switched on the hot water half an hour before hopping in and ended up with a warm shower that got cool by the end.

On day four, I was getting clever and turned on the water heater several hours in advance, I also turned up the dial on the heater itself. It had been set just a little below "warm" so I cranked it up well into the "hot" range. Feeling confident, I hopped in and .... nearly scalded myself. I wasn't too worried because I figured I'd just turn it down--add more cold water by adjusting the facet itself. So I turned the facet to the right in order to increase the flow of cold water into the mix... No change. Hmmm.... maybe the hot and cold are switched in India, so I turned the facet to the left.... still no change. Hmmm....it appears that the water in the tank is piped directly to the shower and you select the warmth of the shower by the dial on the hot water heater. In this bathroom humor story, it seems that the joke is on me.

So showering is going OK--at least it leads to fun bathroom humor stories--I'm trying to get the right temp, but sometimes I forget to turn on the hot water heater 30 min before and then I end up with a cold shower. Oh, well. My first week has gone well. I really enjoy the people here; they are very warm and kind people.

Remember the vexing question that came to me? What happens when a cow dies? I could see the carcass out my office window. On Friday, there was about 30% of the cow left. The hide had "melted" to the ground and some of the bones were showing. Today, there is no trace of it. I don't know if someone has kicked dirt over what was left of the carcass, or if it has been totally eaten--bones and all--or if it has been removed. I'm too chicken to walk out there to take a closer look; it is a bit unseemly in my nice business clothes to go kick around in the dirt searching for the remains of a dead cow.

Several of you have written to say that most of the cows are owned by someone and that people let their cows out in the morning to graze and the cows wander home in the evening to be milked. This is apparently a fact of which many Indians are ignorant because I've gotten varied stories when I've asked about the ownership of these cows.

I was told that stray cows are a bit of a vexing problem for the Indian government because they don't know where to put them. In my Western mind, I thought, "Well, just round them up and .... take them to the animal shelter ... oh, wait, at the animal shelters in America the animals that don't get adopted get put to sleep .... oops Indians believe cows are sacred and wouldn't ever kill them." How's that for an interesting dilemma?

One more twist to add to the bathroom humor motif. The picture at the top of this page of toilet seats was captured outside of a local shop. It begs the question of where or how these devices are used. I didn't ask, and am not sure if I want to know.

← Previous: Visit to the Market

Next: Traffic in India →