Culture Asia Style: Holy Cow, What Happens when One Dies? 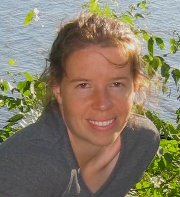 Note: Culture Asia is part of a travel blog that I wrote during an extended business trip to India. I spent two months in New Delhi as my employer implemented a new business unit in two of its call centers. In addition to my professional work, I took time to study Hindi, an effort that fostered greater co-operation and trust among my Indian business associates. It also helped me better understand the culture. We believe that language opens a gateway to understanding culture. These pages focus on my observations and experiences in India. While I was there, I practiced Walkabout Language Learning. See the list of "More India Stories" on this page to explore how culture and language intertwine.

Namaste (which is a traditional greeting in Hindi), 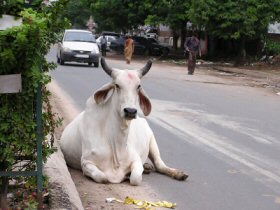 A cow reposes in the road in India.
iStockphoto

As I mentioned, I have found the wandering cows a surprising feature of the culture here in India. Before I arrived, I had assumed that although there were cows in the city centers, they were guided by cowherds who helped protect them and keep them safe from traffic and led them to rich grazing zones. Imagine my surprise when I discovered that there are no cowherds shepherding these animals around. This was particularly astonishing to my American frame of reference where cows are kept in herds, in the wide open spaces of the country where grazing land is plentiful (well, I guess they aren't all permitted to graze, since the majority of cows in the US are fattened in feed lots ... ah, but that is an issue to be championed another day). Still, I've only seen cows behind fences out in the country. I'd never seen one wandering freely in a major metropolitan area. Never! Until I arrived in India. They are all around, right in the heart of the city, usually grazing on the grassy medians between three and four lane roadways. They often lie down in the road to chew their cud.

As I've observed these cows who appear to have no owners, this question came to mind: What happens when one of the apparently ownerless cows dies? Does someone remove the corpse? Little did I realize that I would have the opportunity to find out so quickly.


Driving to work today, I saw a cow lying by the side of the road with a strange companion: a dog. I wasn't sure if the cow was just sleeping, but when I saw the dog standing over him, I had a pretty good idea that he was in the deep and irreversible sleep of death. We drove past him three times because the driver has to make a U-turn around the median of the divided highway, then drive back on the other side of the divided highway to reach the entrance to the call center complex, then make another U-turn to enter the frontage road that leads to the center (see this picture which is similar, although not a picture of the call center in which I worked). That is culture Asia style: no stop light allows an easy left turn directly into the call center, instead we have to drive back and forth to get into work.

Now that I'm at work, the window by my desk on the second floor looks directly down on the cow. It will be an easy matter to keep tabs over the next few days as to what happens to this cow. One thing I know for sure: it will not stay there because it is the only dead cow I've seen, and I'm pretty certain that with the vast numbers of cow, this one is not the first to die.

So far, the dog has picked at it some, although it did not seem to be successful in getting much meat from it. It almost seemed as if the hide was too tough. The dog finally ran away. As yet, I do not know what the final fate of this cow will be, but with a little patience and observation, I should find out what happens to the dead cow over the next few days or weeks.

I thought you might also be as curious as I was about what happens to these ownerless cows. It really seems like they are just wandering around in groups of 5-10 cows, and no one appears to own them. It is also interesting when they decide to lie down in the road. Usually, they don't lie in the center of the road, just in the center of the lane closest to the median. The cars simply drive around them. The culture in Asia is very different from anything I’ve ever experienced.

The Culture of Asia: Cows in India

When I first traveled to India, I thought that cows were sacred. Although, I do not understand the Hindu religion well, I presumed that cows played a role in Hindu worship. I had heard that Hindus believe in reincarnation, I thought that they believed that being reincarnated as a cow was the highest order that one could achieve. I assumed that because of this belief, they considered cows sacred.

I had it all wrong. Hindus do not aspire to be reincarnated as cows. However, as with so many topics that I encountered in the culture of Asia, what Indians believe is difficult to tease out.

Many Hindus reverence cows. Milk and dairy products are an important part of the Indian diet, and cows provide needed food products. Most Hindus do not eat beef, in fact, many of the Hindus I met were "veg" (vegetarian). I was frequently asked whether I was "veg" or "non-veg." It took me a while to sort that question out in my mind since I view the world from opposite point of view. For Indians, "veg" is the most common eating preference, while "non-veg" is the exception. In my experience, omnivores are most common and vegetarians are the exception to the rule.

For some devout Hindus, the eating of meat is repulsive. I remember an experience during New Hire training when a couple of the young men where discussing eating meat. One of the women in class said that it was disgusting, and would they stop talking about it because it was grossing her out. Apparently immature men around the world have one thing in common--they like being disgusting. Her protests fueled further discussion, and they began suggesting different types of animals to eat. She was so repulsed by the conversation that she excused herself from the room. There was an awkward silence when she returned and told the class that she'd gone to the bathroom and thrown up.

For many Hindus eating meat, especially beef is not allowed. Some states in India have laws that prevent the killing of cows. Protests have been held before parliament to protect the cow, cow protection groups have grown, and at least one person has been lynched by vigilante mops for storing and eating beef.

Ironically, in 2015, India was the largest exporter of beef in the world. Indians will be quick to say that most of that beef is from water buffalo. It is not repulsive to Indians to kill water buffalo. Several people told me that water buffalo were stupid and always needed to have a person shepherding them around. They always followed that comment by saying that water buffalo are valuable. It is unclear whether the beef for export was produced legally or not. Wikapedia cites a source that claims that in 2004, there were 3,600 legal and 30,000 illegal slaughterhouses in India.

Some say that Hindus hold cows to be sacred. Others say that they are not worshipped. Some say that eating cow is taboo. Where does that leave us? It seems to be a quandary, which is what I noticed with many topics in India.

There is a certain reverence for cows. From what I saw, there is a high level of tolerance and freedom accorded to cows. In the US, we don't think our cows are smart enough to be out on their own, and we spend a lot of money and energy making sure they stay in designated areas. In India, cows are given freedom to walk and wander as they wish, and everyone moves gracefully around them.

Next: Visit to the Market →