A Unique Way to Explore the Taj Mahal: Pull a Rickshaw

Note: Explore the Taj Mahal is part of a travel blog that I wrote during an extended business trip to India. I spent two months in New Delhi as my employer implemented a new business unit in two of its call centers. In addition to my professional work, I took time to study Hindi, an effort that fostered greater co-operation and trust among my Indian business associates. It also helped me better understand the culture. We believe that language opens a gateway to understanding culture. These pages focus on my observations and experiences in India. While I was there, I practiced Walkabout Language Learning. See the list of "More India Stories" on this page to explore how culture and language intertwine.

The Taj Mahal Surpasses All Expectations 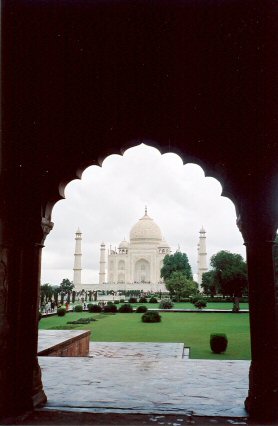 I finally made it to see the Taj Mahal. Wow! Wow! and Wow! It is amazing in a way that I can hardly describe in words. Few things that I've seen have been spectacularly more amazing in person than in photos, but the Taj Mahal is just that. As I came through the gate and saw it, my heart jumped and I gasped because it is so amazing.

I studied Humanities in college. In fact, I have a Bachelors degree in Humanities. What's that, you ask? It is the study of things that humans have made: art, architecture, music, literature, language, religion, philosophy and more. Huh. What can you do with that? Well ... let's see you can ... write websites about language learning ...

The Taj Mahal made a pretty picture in my Humanities of Islam text book, but it was nothing compared to Michelangelo's Pietà in my European Humanities class. That was the artwork that I lusted over. The grief of a mother: Mary with Christ's life-less body draped across her lap moved me deeply. I was excited when I made it to St. Peter's Basilica in Rome, just a year after I graduated. It seemed a long wait as I percolated through the thick crowd to the viewing window.

What a disappointment! Bullet-proof glass separated viewers from the sculpture that was set back many feet behind the protective glass. The sculpture is so far away that it appeared only slightly larger than a postage stamp. Well, maybe a bit bigger than that, but still it was hard to see. The bullet-proof glass was covered in smudgy handprints and scratches left by thousands of visitors. It might have been spectacular, but I forgot my field glasses. Speaking of Michelangelo, visitors can get close to the David in his full seventeen foot (5.17 m) uncircumcised glory. But, I digress ...

Anyway, back to my college textbooks: the Taj Mahal. In the books it was nice, but not moving like the Pietà. The best pictures of the Taj Mahal are the ones, like the one on this page, in which the Taj is framed by a scalloped archway. The artistic composition of the photo makes it pretty, but the building itself seems rather unspectacular.

In real life, seeing the Taj was the opposite of seeing the Pietà. I was stunned! The white marble glows in a way that gives the building a spiritual component. It appears as though it is alive: solid, stationary, living rock. I put the Taj Mahal at the top of my list of "things to see in person before you die."

"Excuse me sir, but could I pull your rickshaw?"

The other sight that I spotted on the way from the parking lot to the entrance gate tickles my funny bone.

Cars cannot drive to the Taj, so we parked in a nearby lot and took an electric bus. (The bus incidentally is free for tourists, but costs 4 rupees for Indians. Which you might think unfair, until you find out that it costs 750 rupees ~ $17 USD for foreigners to enter the gate surrounding the Taj Mahal and only 20 rupees ~ $0.05 USD for Indians.) You can also take a cycle rickshaw, a camel or a horse and cart to get there. (These cost.)

As I watched out of the bus window, we passed a tourist on the bicycle seat of a rickshaw and his girlfriend on the seat behind him. (It had to be his girlfriend, right? He was trying to impress her because men assume that women are impressed by a show of masculine strength.) He was straining his heart out to barely move the thing along while the rick driver ran along side. Oh, it was a thing amazing and humorous to see: a one-of-a-kind way to explore the Taj Mahal. I can only imagine the story the rick driver told his family that night: 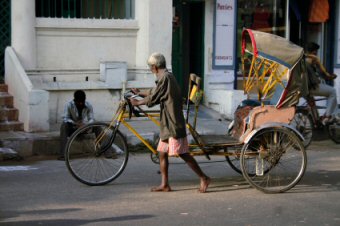 In the family home that night with his extended family that lives together, the uncles, cousins, brothers and their wives gathered around:

"Oh, family, you will never believe the thing that happened to me today. Those crazy American tourists.”

An uncle: "Tell us; surely, it cannot be as crazy as when Uncle Rao drove his rick into the river.”

Rick driver: "Oh uncle, it beats even that story. Today when I am pulling my rick, the tourist-ji, he is asking to me for him to pulling my rickshaw. So I saying him, no I will pulling it. But he will not listening, and so I am letting him pull.”

Uncle: "No, it cannot be so. These Americans truly are crazy.”

Rick driver: "Yes, it was so. He is paying me the money to pull the rickshaw and I am simply running along side while he pull...."

It was quite a sight to see.

← Previous: Whatever You Do, Don't Spoil Your Car

Next: Poverty in India: A Little TV Tonight? Your Tarp or Mine? →