The words Machu Picchu bring to mind the mystical city of the Incas. It is one of the new Seven Wonders of the World. 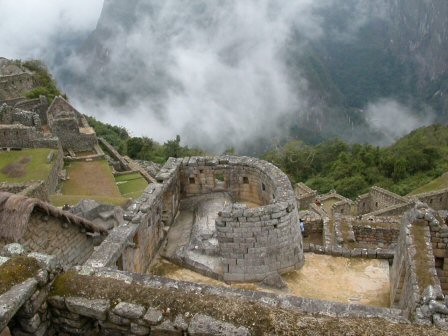 I'm still trying to figure out how to write about it. Words can't convey the enormity of what the Incas built, nor of what remains today, five centuries later. Books and studies abound on these new Seven Wonders of the World. The only thing I can add is my personal experience…

Moment One: Tiptoeing on Top of the Clouds

They say Machu Picchu, Cusco, and the entire Sacred Valley are mystical. Though I don't get swept up by that very much, I have to say the atmosphere was … well, mystical. When I came over the rise at the top of the mountain and saw Machu Picchu's Inca architecture spread out below me (see photo below), the scale and the beauty overwhelmed me. I felt as if I were stepping into a different world. I understand why it has been named one of the new Seven Wonders. 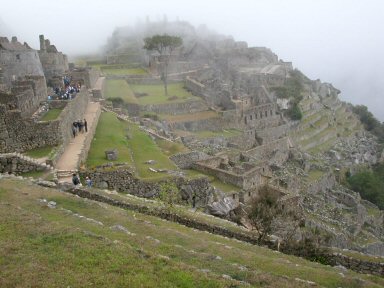 At the first stop, while our guide spoke to us of the history, the passion, the determination, the skills, and the remarkable intelligence of the people who built Machu Picchu, clouds drifted past. The moment was surreal as looming peaks, our guide, and nearby visitors alternately appeared and disappeared, muffled and shrouded by the mist.

The vivid green of the mountains, the ephemeral mist, and the profound silence conspired to transport me to another time and place. Every step of the way, it seemed, we experienced yet another example of the Incas' extraordinary building skill and tried to visualize how they carved and hauled multi-ton blocks of stone into place so the irregular shapes would fit together perfectly without mortar or cement, forming nearly indestructible walls for their city and its buildings. Without a doubt, Machu Picchu offers its own seven wonders to the world: the Inca art and their mastery of stonemasonry, the engineering, the irrigation on top of the mountain, the agricultural experiments, the public water system, the natural compasses, and the ability to capture perfectly the summer and winter solstices. In a word, I was awestruck and it reconfirmed in my mind its status as one of the new Seven Wonders.

On the Way to Cusco

A Visit to Machu Picchu

Later, while Terry and Shawn climbed Wayna Picchu, the peak that rises like a giant behind Machu Picchu, I strolled around to visit various places we had missed on our guided tour and to practice some Walkabout Language Learning. At one point, I came across a huge stone bench. The docent suggested that if I sat on the bench, closed my eyes, and turned my palms upward, I would receive energy. Though I was skeptical about the energy, the bench looked inviting, especially with my back burdened by the heavy gear the guys (my husband and son) had shed before they left for the big climb.

So I followed instructions. Much to my surprise, almost as soon as I closed my eyes, a small, blood-red spot formed behind my eyelids. "Just the effect of the bright sun" (which had quit playing hide-and-seek with the clouds), I thought. Then the spot started to grow in size and intensity, until it filled the entire field behind my eyelids. “Interesting.” Then an enormous eye materialized from the red: a black iris against a field of white. “Ooooh. Very weird.”  Then the eye morphed into ragged green and black stripes almost perpendicular to the horizontal. As I studied the stripes, I realized they were a snapshot of the rugged face of Wayna Picchu. “Now this is something beyond my experience!” Could this be another reason for the new Seven Wonders designation?

I described for the docent what I had seen, and he gave me a lengthy, rapid-fire, enthusiastic explanation (in Spanish, of course) of what it all meant. The main point was that I had had a vision, and a green tree had appeared above my head. I'm not totally sure what he was trying to say, but surprisingly, I didn't get the least bit tired in the remaining couple of hours as I lugged around the gear for all three of us! Did I really have new energy? Who knows?

Note: The Monday after I visited Machu Picchu, I described my experiences to Jacky, my teacher. Intrigued, she gave me a written assignment: to write my experiences in English, then translate them to Spanish. I did so and turned it in. She encouraged me to put both versions in our blog. I found the exercise very helpful in building additional vocabulary and skill. You may read the Spanish version by clicking here. Though she was very helpful in correcting my errors, any remaining errors are my own, created after she made her final corrections. . .