Note: UFC Ultimate Fighting Championship is part of a series of blogs that we did when we went to Peru to study Spanish. Each blog focuses on one or two techniques for learning a foreign language. They are designed so show you how to implement Walkabout language learning strategies. Use our examples here for any language you want to learn. See the "More Peru Stories" list of links on this page for additional language learning strategies. Also see our Learn Spanish section. 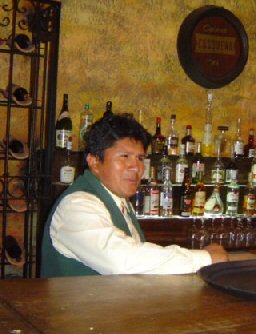 Imagine me trolling Cusco bars in search of a UFC Ultimate Fighting Championship bout. Can't imagine it? Me, either – until now. But there I was, on a mission. It was part of staying connected with the familiar, one of the can't-do-without-it-while-I'm-gone elements of our lives . . . along with frequenting internet cafes to check our email, figuring out how to make international phone calls and local cell phone calls, and trying to find someone to sell us a battery charger to keep our camera batteries alive.

We figured we would become addicted to internet cafes while we were gone, as a lifeline to family and friends and a link to those following our adventures. Fortunately, Maximo Nivel has an internet café at the school, a well-maintained, well-managed means for all students and teachers to stay connected around the world. Beyond that, internet cafes infest every nook and cranny of every city and town, from the two within 30 seconds' walk from our front gate to the anomaly of meeting Peruvians addicted to internet cafes from the very edges of civilization. These were places where even electricity was out of the ordinary, like Amantani Island, where our host goes into Puno from time to time to check his email (4 hours away by launch).

We also imagined we would make the occasional local and international phone call so we bought a phone calling card early on. And we weren't at all surprised to see cell phones as ubiquitous there as at home – along with the oblivious callers shouting into their phones as they tromped down the street. Luckily, we didn't see folks using cell phones in the midst of traffic as is so common at home – the space tolerance between vehicles is much too small to allow for that! We did see cell phone used very differently on the sidewalks, however: vendors, from small children to old women hawked cell phones on all the main streets. I finally figured out they were selling phone calls not phones -- for 50 centimes, you could borrow the vendor's phone and make a quick call to your boyfriend, the boss, or Uncle Bartolommeo. A new twist on the old public phone.

On the Way to Cusco

A Visit to Machu Picchu

One thing we never anticipated that southern California would catch on fire while we were gone, and Shawn would (of course) need to contact friends both to see whether his own home had been affected and, if not, whether his friends needed a place to stay. The challenge was connecting electronically: figuring out where we could use the card we originally bought, identifying the right phone card for international cards, discovering which phones it worked on, and getting it to work during the crisis back home. He did it, though, enough times that he became the family expert. (Luckily, friends and homes in California were all OK.)

Peru TV also helped keep us connected: we watched the Denver Broncos with our Peru host family. Terry and Shawn said they were studying Spanish calling it language practice, and added to their sports Spanish vocabulary. Turns out football is lot more exciting in Spanish – oh, excuse me, but g-o-o-o-o-a-a-a-a-l-l-l-l-l-l-l-l-l – if you know what I mean . . .

But staying connected encompassed more, and that's where the UFC Ultimate Fighting Championship comes in. Shawn is a devoted fan, and a big fight was scheduled while we were in Peru. He had to find a place to watch it. He has explained why he is such a devotee . . . it's the strategy, the training, the different walks of life the fighters represent, the decent human beings that many of the fighters are. I accept that, and I don't try to impose my tastes on my kids. All the same, I was the most improbable person I could imagine to be searching for a place to watch the UFC Ultimate Fighting Championship . . . I don't like fights . . . I don't go to bars. But I've spent more years studying Spanish than Shawn, and when my kids need my help, well, I do what a mom does. I help. Besides, this promised to be a challenge, plus a foray into a different world. As it turned out our quest for an UFC Ultimate Fighting Championship venue became an excellent Spanish lesson.

I grin at the thought of this quest . . . Walkabout Language Learning™ took on a whole new meaning! I used the daily learning cycle for this one, particularly with the new vocabulary: Decide → Prepare → Practice → Communicate → Evaluate ...

Excuse me, Sir (or Miss). Will you be showing the UFC Ultimate Fighting Championship – in this bar on Saturday night? . . . Oh, you don't? It's a little like boxing, only the fighters can use all of the tactics in the martial arts . . . Yes, it's also called the mixed martial arts . . . I think it is probably on satellite TV. Or maybe it's on cable. It's usually on pay-per-view in the U.S. ... Oh ... that's where you have to pay to get a special program shown on your television. [Oops, the glazed eyes tell me the bartender has no clue.] Do you have a program schedule? Who is in charge of choosing the programs you show customers? Do you know of any place they might show it?

We went to bar after bar (and later to gyms and cable TV companies), engaged with waiters, managers, and customers. We Practiced → Communicated, listened for the correct words we were lacking – this was key – as people finally began to understand what we were after. Then we refined our dialogue, and we Practiced → Communicated again. We made some new friends, laughed and joked with them (and each other – over our faux pas), found some promising leads. We had fun! Folks in bars are friendly and helpful and interesting. Who knew? 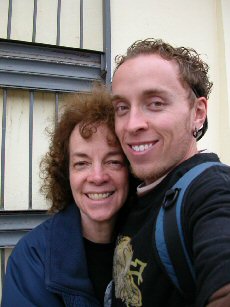 Ultimately, however, watching the UFC Ultimate Fighting Championship on Peru TV seemed a dim prospect, so Shawn figured out a reasonable Plan B. He found an internet café that had a sufficiently high speed connection that he could watch it live on the internet. That, of course, involved another round of visits to find the right internet café. The Spanish lessons worked, by this time, Shawn was sufficiently conversant with the basic vocabulary that he did it on his own.

And me? I am delighted I expanded my horizons, learned how to roll UFC Ultimate Fighting Championship -- "Ou-effe-say" -- off my tongue in Spanish, and got to see a part of Cusco that I otherwise wouldn't have.

Whether you want to watch a UFC Ultimate Fighting Championship or make an international phone call, learning how to do it in the local language provides an excellent language learning opportunity. Download the Walkabout Language Learning Action Guide to learn step by step how to create your own program.

Addendum November 7: Here we are several weeks later in Chivay, unimaginably distant from modern life. Yet Shawn was able to use a similar process when he went searching for UFC Ultimate Fighting Championship videos to add to his collection of memorable bouts.