Travel to Cuba Today: A Flight into the Past

Note: Travel to Cuba is part of a travel blog that we wrote during a humanitarian mission to Cuba. We are convinced that language opens a gateway to understanding culture. These pages focus on the culture of a country that has been relatively isolated for a half century. Our visit offered an opportunity to explore a place that few of our countrymen have seen. While we were there, we practiced Walkabout Language Learning to improve our Spanish and spent time with Cubans through a Jewish medical mission and informal encounters in Havana. See the list of "More Cuba Stories" on this page to explore how culture and language intertwine. 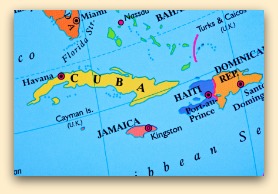 At last! I’ve waited 52 years to travel to Cuba.

I was a high school senior when Fidel Castro, Che Guevara, and Camilo Cienfuegos led the revolution into Havana. Before dawn that day, the dictator Fulgencio Batista had fled Cuba for the Dominican Republic. I knew nothing of them.

For me, January 1, 1959, was TV football – Iowa whipped California in the Rose Bowl that day, and Oklahoma won its second straight Orange Bowl game.

That summer, I went off to college and quickly found a home on the Colorado Daily, the University of Colorado student newspaper. A real-live revolution at America's doorstep both fascinated and frightened us.

At the Daily, we covered Cuba as if it were a campus hot spot – we ran stories on agrarian reform, nationalization of businesses, the flight of the middle class to Florida, the U. S. trade embargo, the Bay of Pigs debacle, the missile crisis. I even wrote a three-part series on my Spanish instructor, an Errol Flynn-look-alike Cuban refugee named Hugo Hartenstein; he had been a small arms instructor for the guerillas.

I dreamed of travel to Cuba to witness the results of the revolution for myself. No dice: when the U.S. slapped its embargo on Cuba in 1961, it forbade American travel to Cuba. Dream shattered.

But now, 2012, my wife and I are in Miami International Airport, tickets for Havana in hand. We're in a tour group of seven, on travel to Cuba to bring medicines to Jewish-sponsored clinics in Havana and Santa Clara.

The Drizzly Route to Havana

In a deluge, the shuttle bus squeaks to a halt near a propjet tethered on the tarmac. Yep, we're traveling to Cuba on a propjet – two propeller-driven engines hang from the wings. One at a time we sprint for the open door – it’s in the plane’s rear, not the front – and scramble up the steps.

Inside: muggy hot, low ceiling, miniature overhead rack, two seats on each side of a Lilliputian aisle. As we travel to Cuba, everyone but us is chattering in Spanish. Most are Cuban-Americans, many on their first trip "home." We hope to have a some opportunities to practice the Spanish that we honed during our language learning journey to Peru a few years back. We'll use Walkabout language learning strategies when we can.

We take off in this storm, pitching about, dipping, dodging invisible and unexpected obstacles. Across from Ann and me, a middle-aged woman is praying. She grabs her seatmate's arm, and digs her nails in. Other passengers are audibly frightened. A five-year old asks his mom what happens if the plane crashes. She assures him it won't. I smile at him, flip him a thumbs up. We're not in danger; it's merely a bit bumpy.

An hour later we fly out of the clouds.

Cuba stretches below, velvety green. We circle and dip. Cuba below remains green and velvety – no suburban neighborhoods appear, no clogged freeways, no multi-storied office buildings. We ease down onto the runway. There are no gates, no covered passenger corridor moving out to meet us. Four commercial jets that have traveled to Cuba sit scattered about near the runway.

Havana at last! It's overcast, but no longer raining. We hike across the tarmac and into the José Martí International Airport terminal, a one-story building as squat and nondescript as a Sixties strip mall. 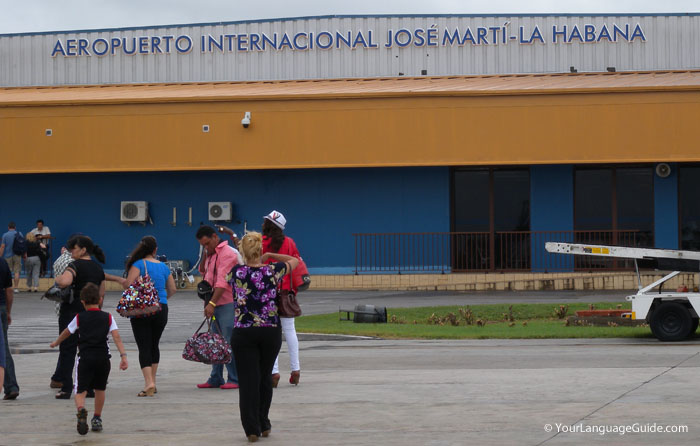 Walking across the tarmac to the Havana, Cuba International Airport.
Ann Marshall

Travel to Cuba into the Bastion of Communism

We're in communist Cuba, but no one demands our papers or snarls "Go home, Yanqui!" No soldiers move in. No one wears a Che-beret or brandishes an AK-47. Rather, a smiling young woman in skirt and blouse greets us, points to the restrooms before we even ask.

Later, we cue up in front of a half-dozen numbered cubicles, present our passports, pose stern-faced for the camera (no smiling allowed), then step through an unmarked door. On the other side, uniformed immigration officers – two men, two women – gesture us through the metal detectors, wave a wand at us, and send us on to the two baggage carousels.

Our Cuban guide, Mirelys meets us, waits with us for our luggage, then ushers us past customs – no stops, no inspection – through a chattering mob waiting to meet friends and relatives, and out to our waiting van.

So this is what travel to Cuba is like today.

First impressions can be misleading, but we record them anyway. Here's what hits us as we twist left and right to soak in everything we see on our way to our hotel:

No billboards in Havana, unless you count these political ones.

Our trip from the airport is too short; there's too much to see. Our plan: we'll check in, then hit the streets of Havana. It's only day one of our travel to Cuba. We have much to explore.

Next: Intrigue sizzles in the air

Return from Travel to Cuba to Culture Corner.

Return to Your Language Guide home.